Liverpool airport parking : The John Lennon Liverpool Airport (LPL) was officially opened in 1933 but was subsequently closed and reopened again in 1986. Originally called Speke airport, it was renamed as Liverpool John Lennon Airport in honor of the “Liverpudlian musician” John Lennon, a member of the Beatles.

Considered one of the busiest in the United Kingdom and the fastest growing in Europe, LPL has an annual passenger traffic of almost 5 million.

LPL has a Main Terminal, a Main Concourse, and a single runway. Being located just 7 miles from the southeast of the city center, it can be accessed easily by train, bus, car, and taxi. The airport also offers many parking options- but the density of daily passenger activity makes it hard to obtain parking.

It is here that TravelCar, a global trendsetter in airport parking and automobile-sharing, makes a difference by providing low cost parking at parking lots close to the airport.

The Liverpool John Lennon Airport (LPL) aka as Liverpool Airport is located on the banks of the estuary of the River Mersey- just 7 miles southeast of the Liverpool city center. This international airport serves North West England and also the city of Liverpool.

In addition to domestic flights within the United Kingdom, the airport also serves Ireland and mainland Europe. Low-cost airlines also operate from LPL, which is considered to be the 12th busiest airport in the UK as of March 2017. The Liverpool John Lennon Airport operates a wide range of flights to destinations across the globe.

In the 1930’s the airport was called Speke Airport and renamed in the year 2001, as John Lennon Liverpool Airport after John Lennon of the Beatles. Never before has an airport been named honoring an individual in the UK.

One of the busiest airports in the United Kingdom, thousands of passengers use the airport every day. TravelCar, ‘the one of a kind’ parking provider, caters to the parking needs of these passengers. 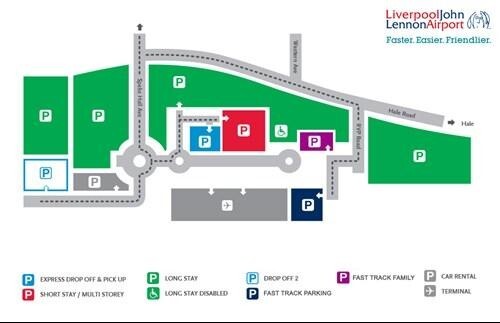 Airport parking is always expensive and the off-site parking lots are far away from the airport. This is where TravelCar has an edge over all others as it scores on both counts. Its spaces are available at the airport, near it or even near the hotel where you reside at prices that are highly affordable. Airport travelers tend to find this very attractive.

.The duration of parking and pricing are necessarily interconnected- the longer you stay- the more you pay. That’s not so withTravelCar- you pay nothing if your car is parked for over three months. In fact, you stand to gain monetarily if you allow TravelCar to rent out your car to bonafide customers during your absence. Even for short spells of parking, the charges are negligible when compared to what the other providers charge.

TravelCar’s parking lots are very close to the airport- hardly 5 minutes away- and even this distance is nullified by the free shuttle services that TravelCar provides for transfer to the terminal.

And that’s not all- its low-cost valet services and automated parking are tempting options for those who don’t want the bother of parking. The advantages don’t stop there- opting for valet services ensures the safety and security of your car as the parking lots are under constant video surveillance.

TravelCar has achieved global recognition because of its low cost parking solutions in areas of high passenger density. TravelCar’s presence can be found at:-

Port of Liverpool, Port of Garston, Port of Manchester, port of Fleetwood are some important ports in Northwest England, where parking is scarce. TravelCar compensates with its low cost parking spaces near the ports.

All TravelCar’s parking lots are safe and secure as they are monitored constantly with cameras and are under video surveillance.

Liverpool airport has a single passenger terminal and a single runway. The terminal is at the south end of Speke Hall Avenue. The terminal has two levels- upper level and a lower level.

The departure gates are located at the lower level at the east and west ends of the terminal. Gates 1-10 are to the right and gates 30-43 to the left. The airport has no airbridges and for remote stands, buses are provided.

When choosing a service provider, the obvious choice would be the one who is dependable, whose services are affordable and whose operations are seamless. That, in a nutshell, describes TravelCar- the ‘people’s parking provider.’ Right from its booking process to its prices, TravelCar is a perfect fit for customers that look for ‘quality alongside affordability.’ It’s considered an economic and great alternative vis-a-vis other car parking providers.

TravelCar’s parking solutions, its customer-centric approach and high standards of professionalism have come in for praise from rating agencies. Trustpilot assigned an almost perfect score of 9+ to TravelCar, which well deserved it. This was a shot in the arm for TravelCar, which is excelling on all fronts- cheap parking, availability of parking spots and customer-satisfaction.

And as if all that were not enough, the availability of TravelCar’s low cost parking lots close to the airport is the ‘creamy part of it’. Its friendly shuttle services that travel tirelessly to and from the parking lot to the terminal is an added comfort that travelers relish.

This is one service that travelers always look forward to while they are away on a trip and TravelCar understands that mentality. That’s why it offers valet services at charges that are just marginally higher than its parking charges. After all, when travelers are focusing on the upcoming trip, it’s unfair that they have to worry about the security of their car. Valet services ensure that their cars are placed under the custody of TravelCar and parked safely in their parking lots under constant video monitoring.

No wonder then that valets are always in great demand. TravelCar’s valet takes charge of your car and your car keys from the moment you enter the airport. Parking and keeping the car in good condition is their lookout. You don’t have to do anything except hand over your car to them. They are the ‘temporary owners’ till you return from your trip. Valets are smart, efficient, and courteous and so assured of themselves that you can’t but help to feel convinced that your car is in very good hands.

The service teams at TravelCar work alongside each other and operate on the same frequency- that of keeping customers satisfied, tending to their needs and extending a helping hand along the customer journey. TravelCar cares about its customers and makes no bones about it- it goes to great lengths to ensure that no problems surface and if they do, ensures they are resolved quickly.

Since Liverpool airport is close to the city center, it’s pretty easy to get there via public transport or other means.

There are many bus services to the airport-

So many things come in the way when you decide to drive to the airport to catch your flight. You have to face traffic jams, untoward incidents can happen and worst of all you have to find a parking space (which may never really happen). That’s the sad story of parking at airports- there are never enough spaces. While you can handle traffic jams (you’ve been in so many) and can deal with a flat tire too if needed (provided you leave early enough), finding a parking spot is almost a ‘lost battle’.

Well, not to worry- if you avail of TravelCar’s parking and valet services, you won’t have problems on that count either. TravelCar assures you cheap parking spaces at their lots at unimaginable prices. So cast aside those worries and leave for your trip in a peaceful frame of mind- just opt for TravelCar’s parking facilities.

We use cookies to provide you with an optimal experience and relevant communication on our sites. We make sure to obtain and respect your consent for the use of your data.

Travelcar uses the following marketing cookies to improve your experience with the brand's site: