Glasgow airport parking : Glasgow Airport (GLA) opened in 1966 and was previously known as Abbotsinch. It is about 10 miles to the west of Glasgow city and is easily accessible from the rest of Scotland. It is a 20-minute drive from the city center and in close proximity to the town of Paisley and Renfrew.

As the 8th busiest airport in UK and 2nd busiest in Scotland, the airport is home to airlines that offer direct flights to different destinations in Europe, North America and also the Middle East. It offers direct flights even to remote Highlands and islands. GLA has more long-haul links than any other airport in Scotland.

GLA has one main runway that is 2658 m long and two terminals- one main terminal T1 and a smaller facility- T2. Though it offers many parking options to passengers that drive to the airport, there are very few that can compare with TravelCar’s low cost parking options and superior customer service.

Located at a distance of 9.9 miles from the Glasgow city center, this important regional airport is often regarded as a “gateway to Scotland. For over 45 years, it has placed the country on the tourism map and has the distinction of serving the greatest number of Scottish destinations. As the country’s largest charter hub, over 30 airlines fly to more than 120 destinations across the globe.

GLA, which was formerly known as Abbotsinch Airport, is an important component of Scotland’s transport infrastructure and handles more than 9 million passengers annually. Formerly belonging to Heathrow Airport Holding, it is currently owned and operated by AGS Airports. 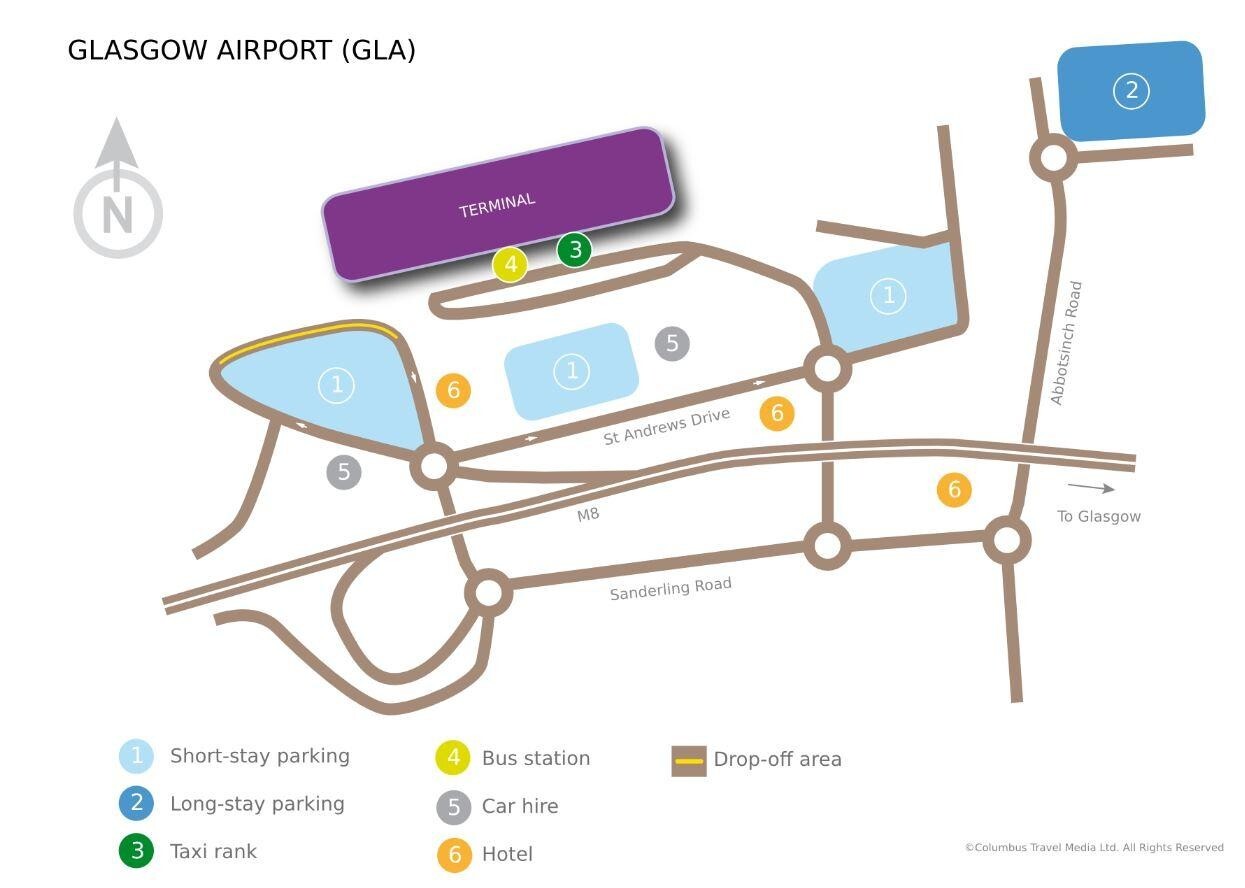 Across the world, it’s the same- parking at public places pose problems of accessibility or affordability- sometimes both. Airport parking lots are prohibitive and off-site spaces are very remote. Parking providers exploit unassuming travelers as their parking fees and unexplained charges are generally a rip-off.

TravelCar dons the mantle of ‘very affordable prices’ and offers low cost parking that’s very much lower than that offered by other providers. What’s more, its parking spaces are not confined to the vicinity of the airport alone but extend to near the hotel where you reside. Thus, the act of parking is transformed from being a ‘nightmare that never ends’ to one of convenience and affordability. Slots are available at a much lower price than ever imaginable, much closer to the airport and easily accessible. Complimentary shuttle services from the parking lots to the airport terminal add to the flavor of TravelCar’s offerings.

Parking fees are necessarily linked with the duration of parking but even here, TravelCar scores brownie points as its charges are a pittance when compared to the expensive airport parking fees. In addition, parking fees are waived in respect of those that park their cars for over 3 months.

TravelCar delights never seem to end- there’s automated parking and valet services for those who are rushed and in a hurry. Charges for valet services are just marginally higher than its cheap parking charges but the value add is much more. TravelCar teams ensure the safety and security of your vehicle by keeping the lots under 24/7 video surveillance.

TravelCar has succeeded in owning parking lots in more than 10 European countries and is so well positioned to solve parking problems at cruise ports, train stations and airports too.

Paisley Gilmour Street, Glasgow Queen Street and Glasgow Central Train Stations, Paddington, King’s Cross, Charing Cross, St. Pancras and Victoria, in London are a few of the major railway stations where parking is always a problem. However, TravelCar makes parking easier by offering cheap parking spaces in the proximity of these stations.

Port of Glasgow, Port of Greenock in Scotland, Port of Tilbury, Port Portsmouth, Port of Southampton, Port Harwich, Port Dover, London-Tilbury cruise port are being invaded by throngs of visitors and cruise passengers. TravelCar’s parking umbrella has these people covered by offering parking spots close to ports and at rates that are normally not found elsewhere.

Cheap parking, premier service coupled with safety and security at the parking lots are a stamp of TravelCar’s presence.

Glasgow Airport has a main terminal- T1 that handles all arrivals and departures. T2 is an add-on facility that caters to low-cost airlines.

The terminal building has three floors:-

T1 has three piers or concourses:-

The Skyhub- the security check area lies between T1 and T2.

Ease of operation and affordable prices are two attractive features that lure customers. TravelCar’s booking process is simple, easy and is uncomplicated. The whole process is just a matter of a few minutes and you’re done. TravelCar’s operational environment is customer-friendly and its parking prices are well below that charged by others. Transparency in customer dealings create trust and build credibility. That’s why people don’t hesitate to choose TravelCar’s services.

Professionalism is the hallmark of any provider and TravelCar scored a superior 9+ o Trustpilot with its approach. Coupled with excellent customer service and a willingness to serve rates high and customers have a cake-walk when they opt for TravelCar’s services.

TravelCar’s low cost parking lots close to the airport are another attractive feature as commuting from the parking lot to the terminal is made easier. Of course, TravelCar’s friendly shuttle services also add another measure of convenience to travelers, who are always fighting against time.

At first sight, you’re tempted to think that valet services are only for those who have a lot of money in their pockets. TravelCar has customers’ needs at heart and makes valet services almost as affordable as their cheap parking prices. That’s a huge relief for passengers who want to focus on their job at hand and not worry about how to park their car or how safe it will be in their absence.

A valet waits for you as you drive into the airport and that’s just the beginning of a tale of luxury. You just hand over your car and the keys and forget about both till your return. Valets park your car for you, keep it in good running condition and have it ready and waiting for you on your return. With so much stress to deal with before your flight, you can easily do without more and opt for valet services from TravelCar is the best way to do that. Nothing makes you feel more important than a personal touch and a show of care towards your car. Valets are trained and experienced enough to understand what passengers need and they act accordingly.

TravelCar’s customer team professionals have just one underlying principle- to provide the best possible customer experience and always work in the best interest of its customers. Transparency and accountability are the pillars around which the team pivots. With experience and knowledge on their side, TravelCar’s teams aim to cater to customer whims to the largest extent possible. Their work culture and the core values by which they operate encourage customers to choose TravelCar over other providers.

Service teams have the right attitude and are keen not only to resolve issues and solve problems but also to ensure that the smiles are back on the customer’s face. They are always willing to do what it takes to improve their services, make them better and more meaningful for customers. By adopting a constant learning curve and trying to achieve perfection in what they do, the staff at TravelCar are as special and unique as the provider is.

The nearest station to Glasgow Airport is about a mile from the terminal-Paisley Gilmour Street-McGill’s 757 connects to the airport from Stance 7.

Citylink is a coach company that serves more than 200 towns and cities across the country.

There’s a nice stretch for cycling- across the campus linking Abbotsinch Road in the east. This, in turn, connects to Paisley and Renfrew.

You don’t want to be stressed out when you are going on a trip and have to catch a flight. However, that’s neither here or there-it just happens that you are stressed right from the moment you decide to drive to the airport. There are so many question marks- can you reach the airport on time, can you find a parking space quickly enough so that you have time for security checks and check-ins? While most things can be managed, sometimes you’re stranded at the airport because you’re not able to park your car. The wisest thing to do is to leave this part to the parking provider which is on the lips of most travelers- TravelCar. Once you take that decision, you feel liberated, because TravelCar finds parking spaces close to the airport and not too pricey at that. Opt for valet services and your parking problems are solved.