Luton airport parking : The London-Luton Airport (LTN) was opened on 16 July 1938 and in 1972, it was considered the most profitable airport in the country. Located 32 miles north of central London, 1.7 miles east of the town center, it is also very close to Junction 10 of the M1 motorway. It was previously known as the Luton International airport and was renamed as London-Luton airport in 1990.

The Luton Airport Parkway train station is very close to the airport terminal and shuttles operate between them. The airport has a single terminal with two levels and a single runway that runs approximately east to west.

London Luton Airport (LTN) is the 4th largest in the London metropolitan area, the seventh largest airport in the United Kingdom and figures among London’s 6 international airports. Today, this single terminal, single runway (running from east to west) airport is a hub for low cost, “no-frills” travel and the charter airlines sector. The Luton Borough Council owns the airport.

The airport, located in the town of Luton in the Bedfordshire County, England, is 32 miles north of central London and 1.7 miles east of the town center. It is also very close to Junction 10 of the M1 motorway. 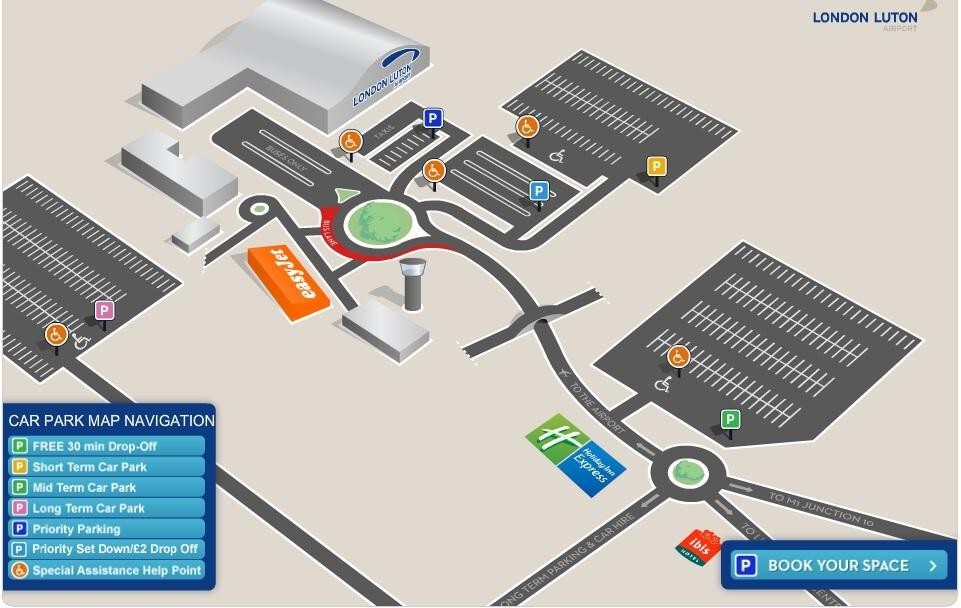 Those who have experienced airport on-site and off-site parking know how expensive it can be. TravelCar comes to the rescue by not only offering low cost parking but also providing parking spaces of your choice- be it near the airport or in the vicinity of the hotel in which you reside. Its ability to offer cheap parking- much lower than that offered by its competitors- is a feather in its cap. By entering into a partnership with local parking and rental companies, TravelCar has been able to build an extensive network of parking facilities across the globe.

Traveling by itself is stressful enough and when compounded with expensive parking fees, the trip can actually be a disaster. However, with TravelCar around and its cheap and affordable services, it puts money back into travelers’ pockets.

TravelCar’s popularity arises from the fact that its charges (even for long-term) are affordable. This global innovator also offers free parking to those who park their cars long enough to be rented out to TravelCar’s trusted customers. The situation is a win-win for both- TravelCar earns revenue and travelers get free parking and a part of the revenue earned.

Primarily, the fact that TravelCar’s parking lots are within 5 minutes distance from the airport, means a great deal to travelers. The addition of free shuttle services shortens the distance between the parking lots and terminals. Low, affordable valet services are also provided, as is automated parking. The advantage is that your car is under constant video surveillance and hence safe and secure till you return from your trip.

Airports: Heathrow, Gatwick, Luton, London City Airport, Stansted, Southend, Manchester, Bristol, and Leeds resound with the footfalls of passengers that board and disembark from airplanes. It is obvious that parking near the airport is ‘a must have’ at these places- that’s why TravelCar extends its low cost parking offerings to such passengers.

Cruise Ports: Port Portsmouth, Port of Tilbury, Port of Southampton, Port Dover, Port Harwich, and London-Tilbury cruise port are becoming more popular every day and the number of visitors is on the rise and so is the need for cheap parking spaces. TravelCar has you covered by offering spots close to the port and that at rates that are extremely affordable.

Why would you choose TravelCar over other providers? Simple- it has something to offer that others can’t provide. Firstly, its booking process is simple- that by itself is sufficient incentive. Add cheap parking prices to it and a transparent dealing environment and you have an unbeatable combination. Travelers are happy that they can strike a good deal that leaves them with dollars in their pockets. In addition, they get friendly and courteous attention and a viable alternative.

TravelCar’s professional approach and excellent customer service are credentials that have taken it a long way up. That’s why it’s highly rated by superior rating agencies such as Trustpilot- it scored a massive 9+ in addition to acclaim by other rating services. Its much touted low cost parking fees have earned kudos.

Adding to its credibility, TravelCar offers parking lots that are very close to the airport and also offers free shuttle services to ensure that travelers are never late for their flights. These parking lots are convenient and easy to access- something that goes down very well with travelers who are always looking for the best available.

When you think of the many episodes of ‘vain parking attempts’ at the airport, your heart is always in your mouth when you drive into the airport. That need never be so if you decide to opt for TravelCar’s valet services. Valet parking and automated parking eliminates the effort to find a parking space. Those who have tasted the flavors of TravelCar’s extremely affordable valet services will willingly surrender their cars to their custody.

The concept of valet services is as old as the hills but lately, it has donned a new avatar at parking lots. The valet takes charge of your car once you enter the airport and drives off to park it in a safe and secure space. It’s such a relief to travelers, who have a thousand important things to think about. TravelCar’s valet services are very reassuring- valets undertake to look after your car as if it were their own and maintain it in top condition till your return. TravelCar’s valet services are as unique and special as are its offerings.

Although the terms customer service and customer satisfaction are bandied about freely, it takes something special to really understand the concept behind it. Customer service is all about ensuring that customers get a good deal and enjoy the customer journey. TravelCar understands the needs of travelers and the problems they face- hence all its actions are directed towards making every customer feel special and important.

The customer team professionals are extremely approachable and are willing to answer queries of any nature- regardless of whether it deals with booking or reservation of parking spaces. Sometimes, they actually go beyond the call of duty and help passengers with problems they face even if it’s not associated with TravelCar.

With Travelcar around, you can rest assured that any booking related or general queries will never go unanswered. For TravelCar, bookings and reservations are not just jobs that they have to do but something that they always need to do well.

Central London. It can thus be accessed by car, train, taxi or bus.

There is no direct train from London to Luton Airport. However, the Luton Parkway station is a common train station for those traveling to Luton airport. From the station, there is a free shuttle bus that goes to the airport. The journey time is 5-10 minutes.

First Capital Connect trains run to Kings Cross Thameslink in central London and a bus transfer will take you to Luton Airport. Average journey time to London is 25 minutes.

Buses are cheaper than trains to travel to Luton Airport.

The National Express services connect Luton airport with Cambridge, Birmingham, Manchester, Liverpool, and Northampton. Between Central London and Luton Airport, there are 75 services daily. There are many pick-up points such as Victoria Rail and Coach Station, Marylebone, Portman Square, Finches, and others. National Express bays are just outside the airport terminal.

EasyBus operates regular, low-cost services between Central London and Luton Airport. There are bus stops on the way to and from the airport.

London Luton Airport is in close proximity to the M1 and M25 motorways, 90 miles from Birmingham, and 32 miles from central London.

These are always available from anywhere to Luton Airport- advance booking is required.

Reaching the airport in time to catch your flight requires some real, good planning- something that you most often don’t do. As a result, it’s always a mad rush to get to the terminal in time. Remember, you have to allow for traffic jams, unexpected incidents and of course the inevitable tussle to find a parking space near the airport. It’s good to use the help that you can get to do that- TravelCar is reputed for its low cost parking spots near the airport. Availing of that will be a huge relief as it will give you some extra time to check in and pass security scrutiny before catching your flight.