Birmingham airport parking : Birmingham, which is considered as “the jewel in the crown of the Midlands” is in Solihull, the West Midlands. The Birmingham Airport (BHX) is quite close to the Birmingham city center- just about 6 miles southeast of it. It is the seventh busiest airport in the UK and is growing at a very fast pace- so much so that passenger traffic is all set to exceed 15 million by the year 2020.

The main terminal of the airport opened in 1984 and a second terminal opened a little later to cater to increasing passenger traffic. Though the two terminals were merged in 2010, they remain divided within the same building as Terminal 1 and Terminal 2. Though there are two runways, only the north-west- south-west one is operational.

Birmingham Airport is easy to access as there are a variety of transport options available. More than 5 companies offer airport parking but during the summer months, they could be expensive. TravelCar has transformed the ‘parking concept’ with an unbeatable combination of low cost parking, free parking and a whale of affordable services.

In the Metropolitan Borough of Solihull, England, slightly to the north of Bickenhill lies the Birmingham airport (BHX). It is situated east-south-east of Birmingham city center and is at a distance of 6.3miles from it. The airport was first known as Elmdon Airport after the village of Elmdon, which lies to the south-west. Subsequently, it became Birmingham International airport and then went on to acquire its current nomenclature- Birmingham Airport.

BHX is said to the 7th busiest airport in UK and offers both- domestic flights within the UK and international flights to Europe, Indian Subcontinent, North America, Caribbean and also the Middle East. More than 50 airlines fly to more than 140 direct routes across the globe.

Birmingham Airport is near junction 6 of the M42 motorway and is connected with the international railway station at Birmingham, which is located on the West Coast Mainline. 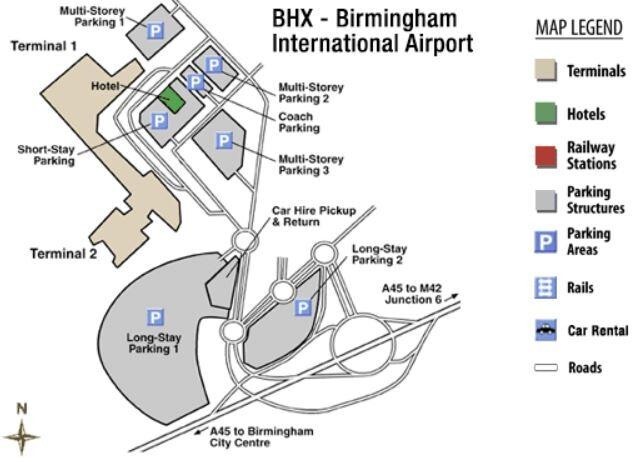 Parking prices depend on the duration of parking and also the type of car parking opted for. The on-site parking charges are very expensive and some of the off-site parking lots are way too far from the airport. TravelCar, the acknowledged leader in ‘car parking and car-sharing’ circumvents both by offering cheap parking spots close to the airport.

In fact, TravelCar goes even a step further- it allows you to choose between parking lots close to the airport or close to the hotel where you reside. Parking at airports is never easy and TravelCar has made it easier and less stressful by offering low cost parking and affordable services. Those who park their cars for over a period of 3 months are entitled to free parking.

There’s more good news from TravelCar- its parking lots are just within 5 minutes from the airport and since its free shuttle services are constantly plying to and fro the parking lots and airport terminal, passengers need never fear of being rushed to catch their flights.

You can even opt for low cost valet services and automated parking and be saved of the bother of having to keep your car secure till you come back. TravelCar understands your anxiety and opting for its valet services is a very good idea. Your car is safe, under video surveillance and you have peace of mind.

TravelCar seems to be everywhere and its low cost parking solutions can be found at places where passenger activity is high.

Birmingham Airport comprises two terminals, the main terminal (Terminal 1) and the Eurohub (Terminal 2). Though the two terminals were merged, both are housed within the same airport building. The terminals are connected by a Millennium Link and the integrated terminal connects to the Birmingham International Rail Station and also the Interchange.

What do you look for when you choose a service provider? Operational efficiency, affordability, credibility, transparency in dealings and good customer service. TravelCar rates high in all those and that’s why it’s easily the most popular parking provider across the globe.

Seamless booking is always an attractive feature that customers look for and TravelCar’s uncomplicated booking process has them hooked. Its parking prices too are so affordable that they put some extra money into your pocket- something that doesn’t happen often. A friendly approach and a willingness to please also go a long way.

TravelCar is rated highly on Trustpilot- it scored a superior score of 9+ for the professionalism it exhibited and the methodical way in which it tackled and solved issues. Coupled with the parking provider’s low cost parking solutions and no ‘please read the fine print approach’ has clearly helped it score over its competitors.

Furthermore, TravelCar’s parking lots are close to the airport and that’s certainly a huge relief for travelers that are running late or are in a rush to reach the terminal. Of course, the provider’s friendly shuttle services make it all the more comfortable for them.

You have enough problems getting to the airport and figuring out how you can reach your gate in time to catch your flight. Certainly, you don’t want to be saddled with the bigger problem of ‘finding an inexpensive parking space’ at the airport. With TravelCar’s valet services, at least your parking problem is solved even as you enter the airport. With the cost of valet services just a shade more than parking fees, it’s worthwhile to be able to hand over your car to your valet and stride towards the airport without giving it another thought.

If you’re wondering how valet services work-then here goes- No sooner you enter the airport, a valet is waiting to wait on you and your car. He relieves you of your car keys and before you can even express your gratitude, your car is parked safely and securely. Valets are a boon to people- they take care of your property without bothering you and inconspicuously tend to vehicles without appearing to do so. They secure your car, keep your keys safe and when you return entrust your property back to you- well maintained, polished and oiled. That’s a luxury as far as you are concerned and the fact that you can be at peace while you’re away and not have to worry about your car is sheer bliss.

There’s no denying that the ‘customer is king’- TravelCar treats all its customers royally with no sense of discrimination at all. All customers are important and always deserve and get the best is the premise on which TravelCar is built and on which it operates. Without exception, its team of professionals works hard towards satisfying customers. It gives them a ‘good and best’ deal, works with them to solve any problems, answers all queries- in short, keeps them happy and satisfied.

TravelCar is open 24/7 and all customers and prospects can avail of its facilities and services whenever they want. Service personnel are only too willing to lend a hand even if it’s something that generally doesn’t fall within the line of duty. It isn’t surprising that TravelCar has a huge database of loyal customers.

Birmingham is served by a good road network and the airport being right in the midst of UK’s motorway network makes BHK very accessible. Many connecting links to the Birmingham International Train Station only serves to augment such accessibility.

If you’re driving do ensure that you beat rush-hour times in the morning and evening as M6 and M42 motorways can become congested at the junction turn-offs.

Taxis are found at every airport and will pick up passengers from places they identify to transport them to the airport.

When you have to catch a flight, there is so much to take care of, and if you’re driving, you need to start early to beat the morning and evening rush on the roads. You can’t afford to get stuck in the middle of nowhere. Then there’s the bigger tussle before you actually reach the terminal and wade through check-in and security-- finding a parking space close to the airport. That last bit is easy though- for with TravelCar’s low cost parking facilities and its exceptional valet services- that will be a breeze. You do save a lot of time there, so you have enough to see you through the rest.